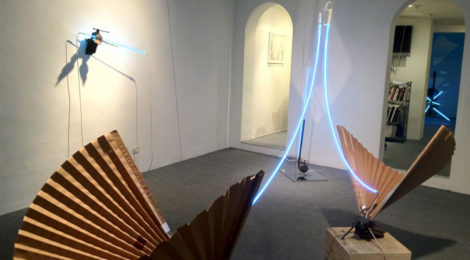 The SPACE Gallery TESTONI in Via D'Azeglio 50, on the occasion of Art Fair 2012, presented "MATTER OF LIGHT"Personal exposure to PHILIP CENTENARI. Alberto Mattia Martini, curator of the exhibition, who has been following his creative ability and has edited and reviewed all aspects of Philip Centenari, introduces us to the works and the expression of an artist known nationally and internationally, that several times during its exhibition program, the gallery space Testoni brought together with other artists and now intends to focus the eyes of the visitors only on his work and the evolution of his art.

“The works of Philip Centenari live the moment of the meeting in which the intangible memory is mirrored in itself, rivoluzionandosi into its opposite and becoming its extension into the future; they are imbued with an indissoluble bond between tradition and renewal, between history and modernity. The material flows in light, "Unbearable lightness" impalpable, where being played between neon blue, wires, mirrors and materials soaked reminiscence human. The artist leads us Cremona between intersections, vertical and horizontal, between parallel planes and perpendicular equilibria, in which the apparent fading of the light absorbs all visible architectural structure. Centenari recovers, recycles the material and then appropriates the past, symbols, of his land, then corrode the time, shifting the center of gravity within the enigma technological. The attraction for space, for geometries, for vertigo structural sculpture installation needs, is inevitable continuity in frames, revealing views of the great cities of the world. In these frames with holes and surfaces pierced the eyes of those who naturally live and relate in a world of increasing total, "Connected" in real time on events and ideas, but with this resolute gesture, "Violent" and unequivocal, wants to report a world pervaded by a pathological lack of real emotions.” 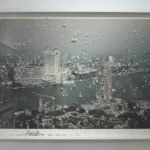 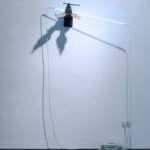 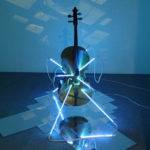 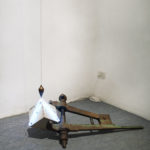 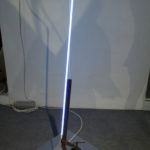 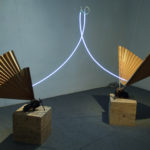 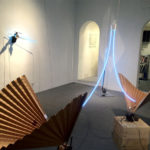 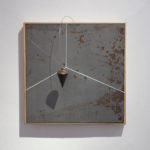 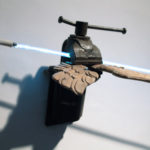