Born in 1973 a Milano, where he lives and works. Alongside scientific studies experience as an assistant production designer. Research in the graphic and writing and will form the courses of Cartoon School in Milan, where it obtained precise anatomical representation of the figure capacity. Since the late nineties works in three-dimensional metal sculptures, made of iron wire, and from 2005 He began working on large sculptures, focusing attention on his face and his physiognomy characters. From 2007, appears in his work the rust factor obtained by natural oxidation. His personal "OVERSIZE" the 2008 Montrasio at the Art Gallery in Milan, It is enhanced by shots of the great master of photography Gianni Berengo Gardin, that shows him at work in his studio, and appears in the catalog "Gianni Berengo Gardin - Reportrait", between the characters in the world of the culture of the '900 immortalized by the distinguished photographer. In 2010, for the exhibition "waited", The Heroic fury at the gallery in Milan, He presents his sculptures in dialogue with works by Gianfranco Ferroni. In his exhibition "Prodromes", Cavaciuti at the gallery in Milan 2013, He made a series of figures in fio iron and materials and everyday objects and other new works created by drawing with rust anthropomorphic figures on thin iron sheets. The catalog that accompanies this exhibition is enriched by photographs made in his study by the Austrian photographer Andreas H. Bitesnich. For the "Braids" exposure, in 2014 at the gallery The Heroic fury of Milan by Alberto Mattia Martini, He continues its dialogue with the masters of contemporary photography, in this case with the work mosaic made with Polaroid film by Maurizio Galimberti.

For Macrocosmi project Berlin-Bologna, Fabrizio Pozzoli has presented his works in dialogue with the photographic images of Benyamin Reich and Lea Golda Holterman for the exhibition CHECK POINT to Testoni Space gallery of Bologna in collaboration with the Berlin Werkstattgalerie. 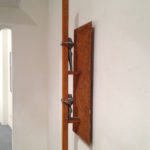 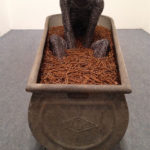 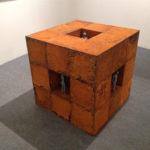 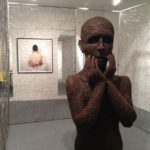