FABIO GIAMPIETRO born in Milan in 1974, where he lives and works. He graduated in 1998 at the University Institute of Modern Languages ​​IULM in Milan

Creates paintings often large which stretches out the oil color and then scrape away the same pigment and bring out the white of the canvas to create effects of light and tonal contrasts with the gray-ocher paint that shape the architecture.

The paintings of Fabio Giampietro possess a deep emotional quality that is able to break free from the constraints of outright Urban Views and styles that belong to walk the borderline with the dream, la meta-metromorfosi, dizziness and sometimes the nightmare. Although often moving from real architectural episodes, they are able then to transfigure reality to give the suspended images and dreamlike atmosphere that contains within itself a plurality of ups and downs and references that both recalls the noir atmosphere of Sin City, the film of 2005 directed by Robert Rodriguez, Frank Miller e Quentin Tarantino, As the Orphic symbolism of some inventions by Odilon Redon, perceptual paradox of M. C. Escher and the vortices of certain prospects "extra-terrestrial" aeropainting futurist Tullio Crali and Gerardo Dottori.

In this way, each painting becomes a unique insight and detail that fits with different gradations in a spectrum ranging from topographical likelihood of places until the opposite extreme of the absurd, the chimeric, dell'onirico, the parascientific. Along this axis will have the artist's works, pandering, some more and some less, these aspects and these psychological shades and making tank of cultural energy that encompasses within itself abstract figure and potential Figurative, pleasure of free creation and spiritual rigor of the form, spontaneity and project. To Giampietro this means having split, He tripled and multiplied its vanishing points, spatial and mental, in a new psychological mapping where the references are no longer converging, but always happily drifting, ready to displace all certainty or acquired habit. Hence the paradox away owned by the images created by the artist: They are evoked visions, and never simply reproduced; in them the real life sounds like a distant echo, and the tension in the movement that is felt not so much about the actual walk a distance as the vertigo of the doubt, search, the ability to experience wonder, the position of the artist who does not claim a single role, but can move in many of them, doing play with their individual ghosts and those of the community, their personal mythologies and those shared, transculturali e archetipiche.

Points thus become mental landscapes, metaphors and prostheses of corporeality, accelerators energies, super-connectors of experiences, key vehicles of urbanized hallucinations and possible crossroads of existence of those who live the modern world. It remains in each of us the choice of its most exciting dream or his worst nightmare. 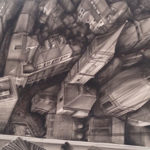 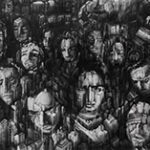 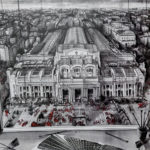 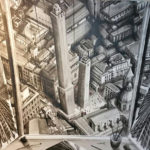