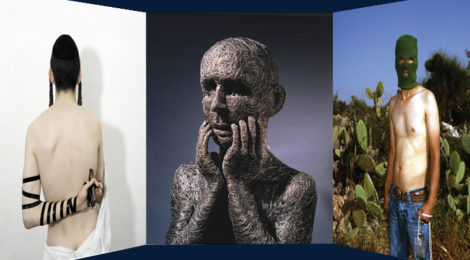 CHECK POINT conference on the exhibition at L.UN.A. - Free University of Arts 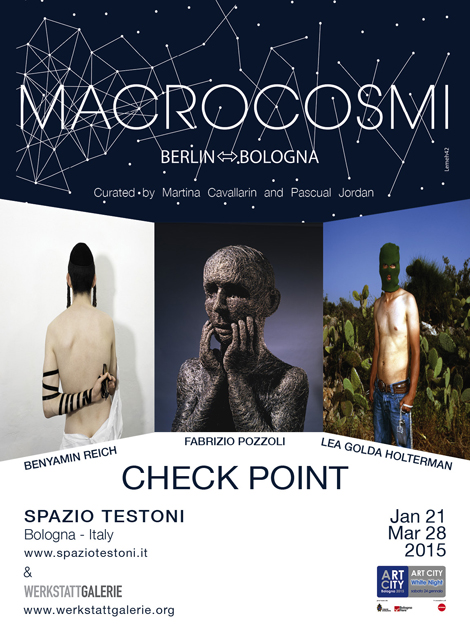 Thursday 19 February 2015 at L.UN.A. - Free University of Arts - in Bologna in Via Massimo D'Azeglio 33, at 18,30 to host conference on the exhibition CHECK POINT with installations and works of the Milanese sculptor Fabrizio Pozzoli in dialogue with the works of two photographers and artists Israelis Benyamin Reich Lea Golda Holterman, inaugurated at SPACE Gallery TESTONI Bologna during Arte Fiera for Macrocosmi event and which will remain on display until 28 March 2015.

from 17,00 all 18,00 The conference will be preceded by a guided tour by the curator of the exhibition Pascual Jordan CHECK POINT underway at Gallery Space Testoni in Bologna in Via D'Azeglio 50, dedicated students to L.UN.A. and to all those who wish to participate with free admission.

This conference-public meeting aims to analyze some thematic aspects that the exhibition CHECK POINT proposed through an exhibition that presents in the first room of the gallery Spazio Testoni a cage made of wire site specific Fabrizio Pozzoli, through which the audience is forced to transit in tunnels, thereby making it touches the large sculpture in oxidized metal wire "The missing hours", series Oversize Pozzoli. Through the cage they are visible to the gallery walls photographic Benyamin Reich and Lea Golda Holterman, two artists of Israeli origin present on the contemporary art scene Berliner, investigating situations and traditions of the Jewish and Palestinian culture with a personal artistic cutting, but allowing observers of their works to know aspects of daily life of these two peoples, unknown to many of us Europeans and Westerners.

In the other rooms of the gallery continues the dialogue between the sculptures of Fabrizio Pozzoli and photographic images of Israelis and Palestinians made by Benyamin Reich and Lea Golda Holterman.

The many questions from visitors who want to give this meeting response notes are:

What Macrocosmi and why did the idea of ​​this project as an artistic dialogue between Berlin and Bologna?

Martina Cavallarin, who along with Pascual Jordan has edited the first edition of Macrocosmi in Bologna during Arte Fiera 2015, to be followed by the exchange of artists between Bologna and Berlin at the Berliner Art Week of September 2015, It will outline the issues upon which investigates the Macrocosmi project and the reasons that led to the choice of the city of Bologna for this first art exchange with the German capital.

Pascual Jordan explain the situation and artistic Berliner tell his experiences and his encounters with many young artists curatorial Israelis today in Germany and Northern Europe.

How they live their daily lives populations in the territories of Israel and Palestine in the context of serious conflicts constantly being waged between them and even today in the Middle East?

Milena Naldi It has just returned from an exploratory trip in those territories, and will tell us about his vision of the events that happen every day to people who are born, They live and die in those places.

What are the constraints that the Jewish religion and the Islamic pose artistic expressiveness?

Silvia Manfredini It will illustrate the principles and rules of the Jewish and Islamic religions artistic expressiveness of their proselytes.

Because Testoni Space gallery of Bologna has decided to present the work of two Israeli artists in dialogue with the works of Fabrizio Pozzoli for the exhibition CHECK POINT?

Paola Veronesi Testoni tell us how did the idea of ​​this exhibition and the choice of the themes explored by the works of the three artists proposed for the exhibition CHECK POINT within the Project Macrocosmi.

At the end of an aperitif

For information and confirmations: