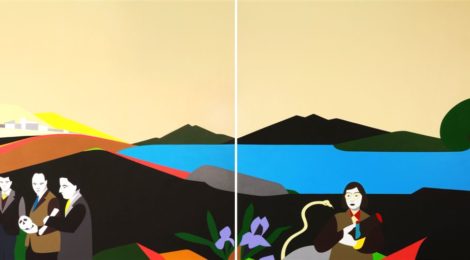 At the opening to the public of two newly restored exhibition areas, the Museums of The Hague Museum "Giovanni Bozzi", located in Via Nuova 33 Avezzano (AQ), host, from 27 November to 28 December 2013, Apple Fucinus la mostra di Ester Grossi, one of the most popular artists of her generation, promoted by the Bologna Testoni Gallery Space.

Lacus Fucinus, by Alberto Mattia Martini and Rossella Del Monaco, It stems from the awareness of painter, Avezzano, to be born in an area of ​​Italy, the Marsica (Abruzzo), only from the point of view natural, archaeological and witness of an industrial transformation, aroused by the great work of draining of Lake Fucino.
The desire to narrate the ancient and modern history of this place was valuable source of inspiration, generating a path for images, which reconstructs the stages of one of the largest, and in some devastating verses, social and landscape changes in the history of Italy.
The Civic Museums of The Hague Museum "Giovanni Bozzi" è nato nel 2012 the same assumptions, Avezzano by order of the City Administration. The scientific project, edited by 'Cultural Association Antiqua, It was in fact conceived with the aim of spreading the knowledge of the rich historical and archaeological heritage Marsicano, with particular attention to the recovery of the collective memory and local identity, linked to the draining of Lake Fucino.
L'Aia Musei, where have already visited the lapidary museum "The Words of Stone" and the Museum of the Fucino draining "Water Wire", It opens to the public Two new pavilions, restored by Regional Direction of Cultural Heritage, in collaboration with the Ministry of Heritage and Culture, that will host, one, the Library Fund Marsicani Studies Center “Ugo Maria PALANZA” with adjoining reading room and, the other, an area dedicated to teaching and temporary exhibitions, dove, thanks to the collaboration between the Association Antiqua and Galleria Spazio Testoni, It will be staged on the last leg of the exhibition of Esther Grossi.
The core of the project Lacus Fucinus It was presented in October 2012 to Cairo Prize, at the Museo della Permanente in Milan, prestigious award for contemporary art, where the painter was finalist. exposure, enlarged and presented in Bologna at the Galleria Spazio Testoni and curated by art critic Alberto Mattia Martini, finally landed in Marsica, land of origin artist and place of inspiration for the works.

Ester Grossi
Born in Avezzano (AQ) in 1981. Diploma in Fashion, Design and Decoration at the Art Institute "Vincenzo Bellisario", in 2008 she obtained a degree in Cinema, Television and Multimedia Production at the DAMS of Bologna. He has dedicated years to painting and has made several exhibitions in Italy and abroad. Vincitrice Italian Factory Award 2010 and Prize finalist Cairo 2012, in 2011 He was invited to the 54th Venice Biennale (Pavilion Abruzzo). As an illustrator has created posters for cinema and music festivals (Imaginary Film Festival, MIAMI-Music Important in Milan, Teatro Lirico Sperimentale di Spoleto) and cover for music band album (A Classic Education). Frequently collaborates with musicians for the realization of exhibitions and pictorial-sound installations.