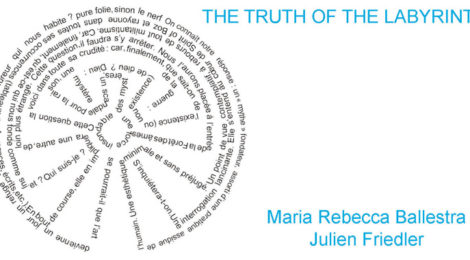 The truth of the labyrinth

THE TRUTH OF THE LABYRINTH
Maria Rebecca Ballestra and Julien Friedler

Truth of the Labyrinth It is an art project by Maria Rebecca Ballestra in 9 stages, inspired by the texts of the homonymous collection Belgian artist Julien Friedler.
A selection of 9 of 44 texts will be the starting point of a series of reflections on the symbolism of the labyrinth, declined and depth through different perspectives and angles. Each stage is for Ballestra opportunity to deal with a macro-theme, He tied up the man and his conscience, as the memory, the death, the body, l’immaterialità, the game, the dream, the mystery, the pilgrimage, the sacrifice.

The exhibition at the gallery SPACE TESTONI in Bologna in Via D'Azeglio 50, which opens Saturday 05 September 2015 from 18,30 all 20,30, It proposes the first works 4 stages of this project in a personal double Maria Rebecca Ballestra and Julien Friedler, and it will remain visible until Saturday 31 October 2015.

FIRST STEP: The Labyrinth in the oral tradition - Memory

Could it be that art will one day become a refuge against the sound and fury within us?
We know our answer : a "myth" founder, together with a regular practice of the human. Minimal aesthetic and without prejudice. A contemplative perspective, down from any activism.
Car, finally, what we founded as subject? Who am I? Will care do we.
A nagging question ... .In the end of travel, it shall involve another, far more strange. That question, it will stop there. We have placed at the entrance of the Forest of Souls. This question here it in all its rawness : car, finally, what do we know of the existence (or nonexistence) of God?
God : Mystery of Mysteries, a scandal to reason, pure madness, otherwise the sinews of war: unfathomable strength, pegged to the artist from the edge.

Julien Friedler – The Truth of the labyrinth text n.2

Works of Maria Rebecca Ballestra realized in Arizona - USA, in dialogue with works by Julien Friedler Series The Word of Angels. 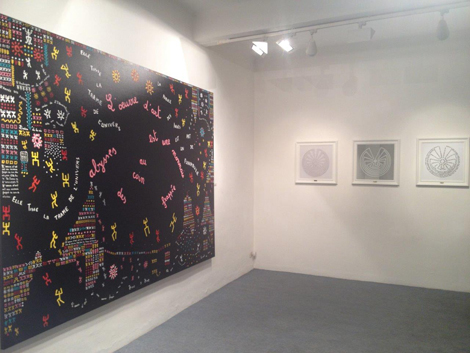 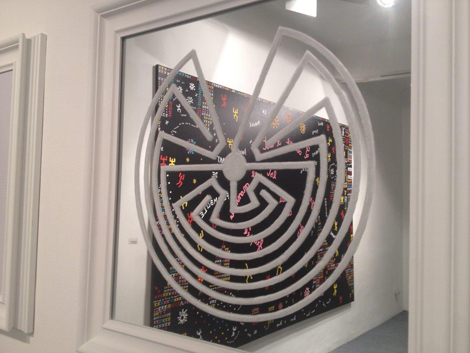 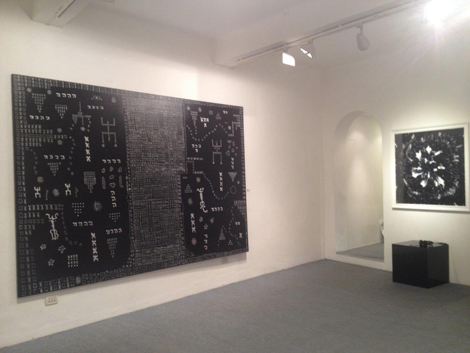 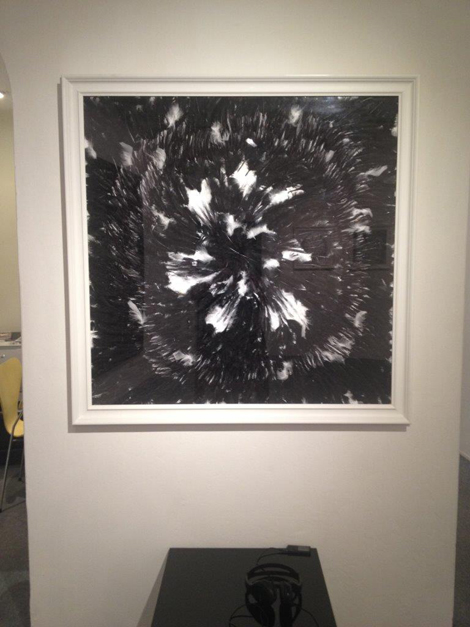 The theme of the labyrinth is often associated with the myth of the journey of the dead, or itinerary "wandering soul". For the Indians O'odham, the maze was a symbol of birth and death. For them, as always in antiquity, the maze was unicursal, Round and shape 7 concentric circles, with a single entrance and a single vicolocieco down the path, in which only two possibilities are to reach the goal or find yourself at the point parting. For O'odham maze is enriched by the human figure at the entrance dellabirinto same, “The man in the Mazen” (Man in the maze). The symbol has different meanings, the Tohono O'odham refer to '' man in the maze "as I'Itoi, referring to the creation myth, and the symbolic journey of humanity and of each individual towards the central black point of the maze, the death, to again become One with I'Itoi, the god who lives in an underground maze under the Baboquivari mountain. 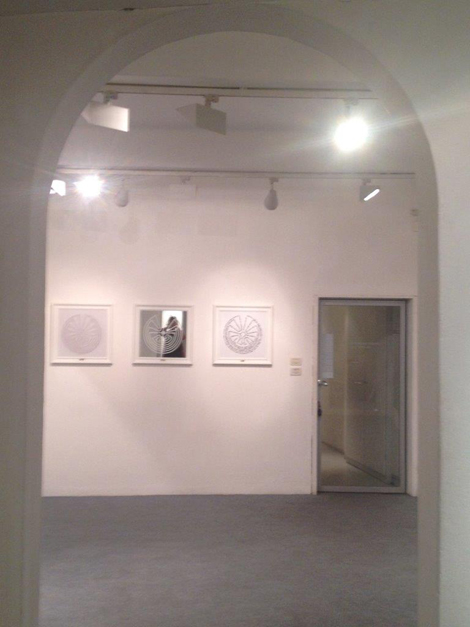 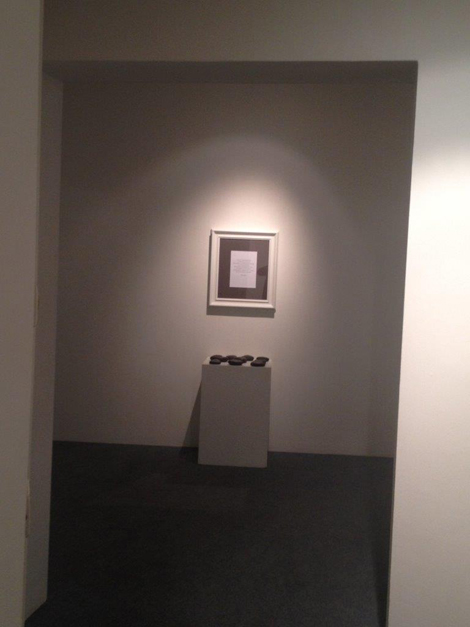 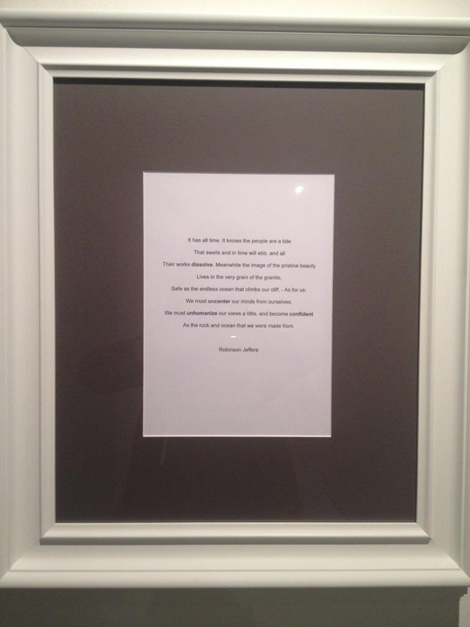 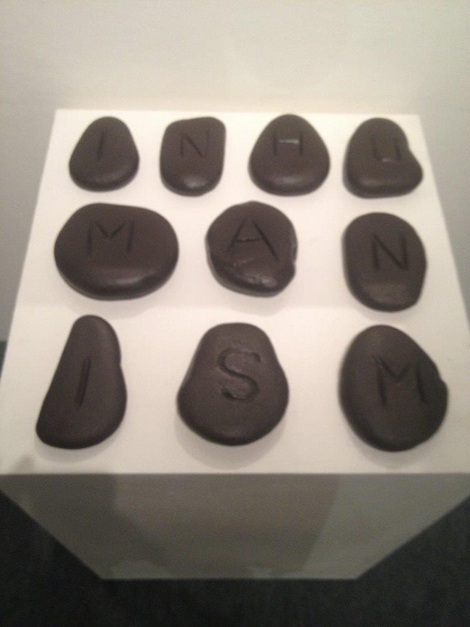 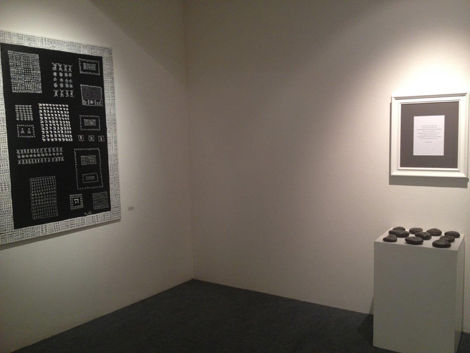 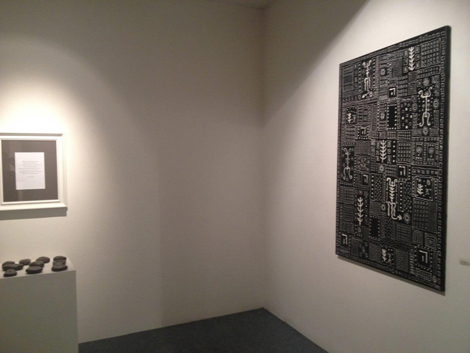 Since then, take a bow, bandons it and our décochons arrow. This will outline a nice curve, sparkle in the sun, before brushing the horizon : on the verge of our next issue. Car, finally, wait art if not a still picture, we own to transcend?
At this stage, the case will become dizzy. An abyss; before rebounding towards the peaks : the, or God opens
and fades to let us glimpse a beyond itself. The : point divine convergence
(all forms). his passing : a pure gem, inaccessible to the uninitiated as the faithful imbibed his faith. An unknown territory, scandalous, bordering on madness. a hallucination. dizziness. But also, a vision, riddled with light.

Julien Friedler – The Truth of the labyrinth text n.3 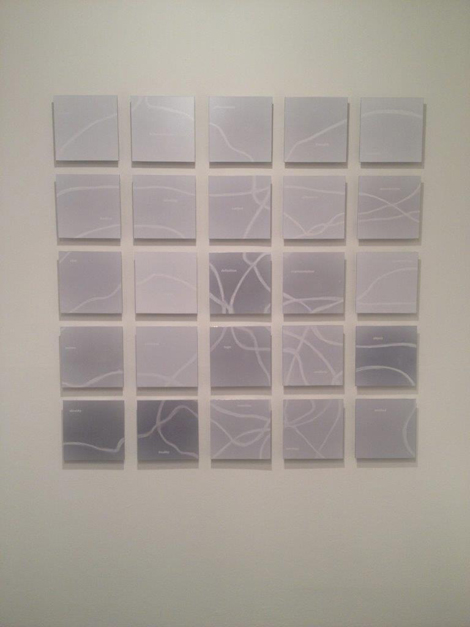 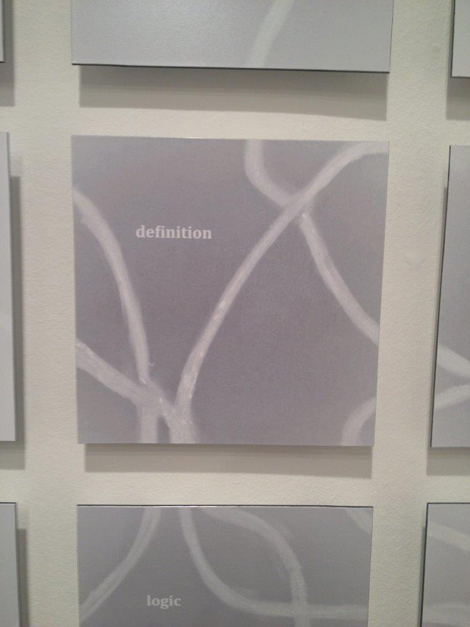 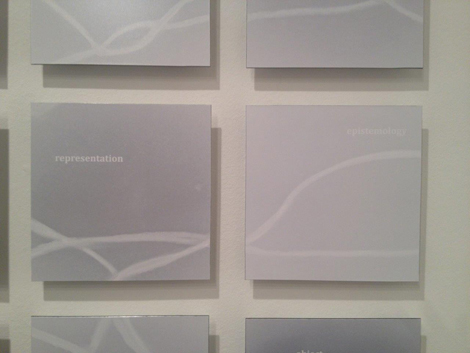 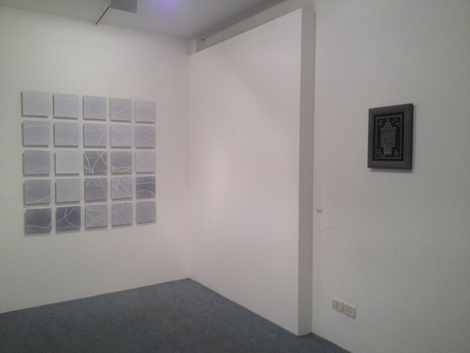 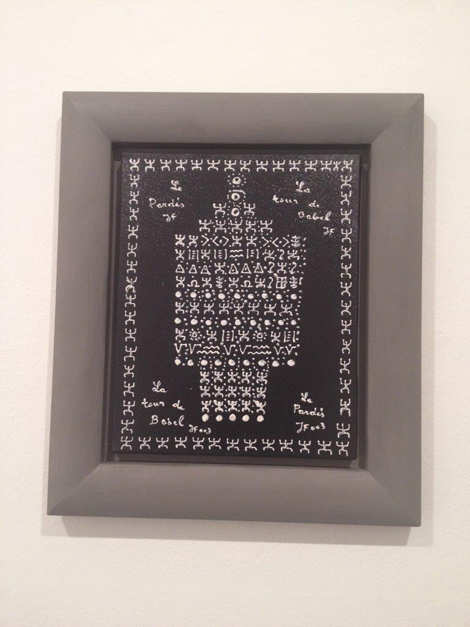 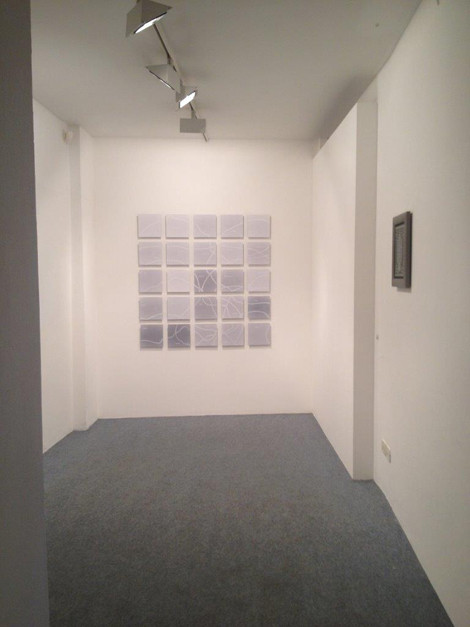 Internet and the flow of information telematics is a new form of intangible maze, a complex and platform for exchange of information, thoughts, ideas. The technology is an extension of our body and our senses. Digital technology corresponds to our nervous system and our brains: an extension of the communication between the cells and their information management that continuously connect and share information with the aim to build and rebuild a network. Another analogy of information management that we find with the brain is the fact that this does not discern between images and reality, or between the experiences in dreams and wake up. So what is the true and the false experience? What image is the simulacrum? Are all idols? Digital technology reflects our awareness of living in the world more and more virtual way, interconnected and non-hierarchical. With all the consequences of the clashes systems, chaos and instability, living in the time of “twilights of icons” we must ask ourselves where we are going or at least, what we are heading. We have the opportunity to recognize the entire life experience as one with nature, world and the cosmos and be aware that the judgments and distinctions are not true. At the end of our passage in the labyrinth of the statue becomes the only truth.

STAGE THREE: The labyrinth in Nature

We therefore only move forward in order to explain our purpose : think modern spirituality,
adapted to the world in which we live.
To this end we will rely on a source image : that of a quest for peace by meditating
indoor. The image is radiant and promotes two existential positions: a glance, born of silence and
inwardly facing ; a Witness contemplating the works and their journey.

Julien Friedler – The truth of the text labyrinth n.5 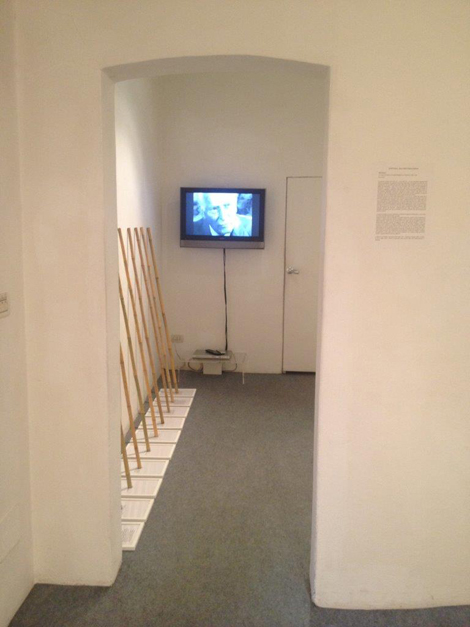 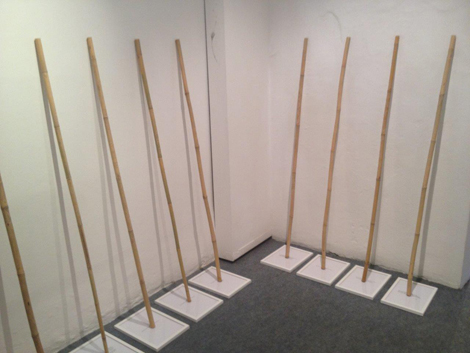 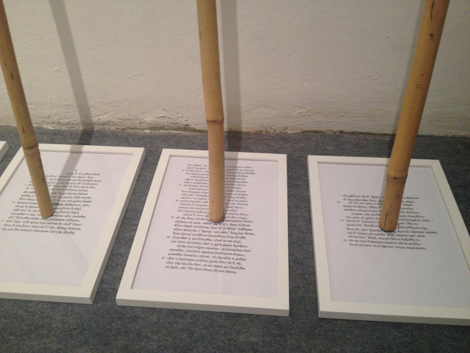 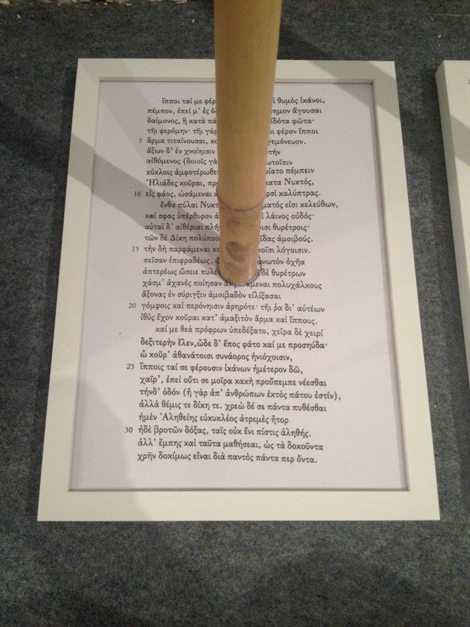 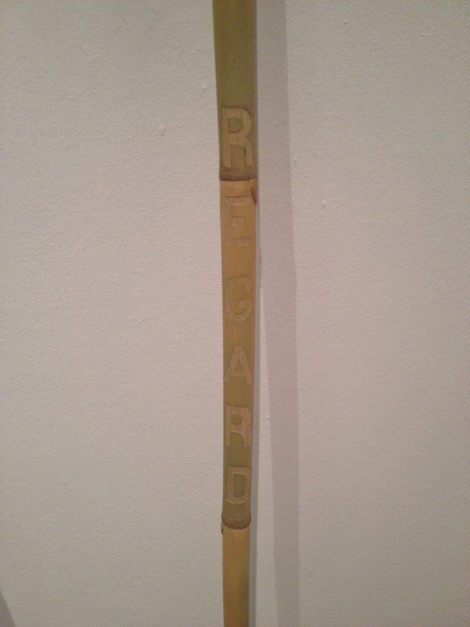 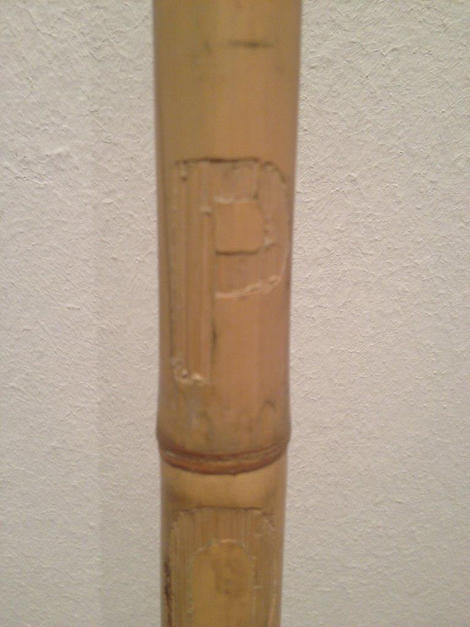 The third stage of the project is inspired by the labyrinth in nature. The first botanical mazes appear at the end of the Middle Ages in Europe soon become an essential element of garden art in the castles parks. Charles V built a labyrinth in the gardens of Saint-Paul in Paris, Francis I in Louise de Savoie park. Charles V introduces them in the parks of its buildings in Brussels and Seville, in the Alcazar gardens in which persists to a rate maze. During the Renaissance and up to the eighteenth century. The gardens are full of mazes, become secular and playful. In early mazes, that do not exceed the height of the knee, and whose route is often very simple , They were followed by more complex designs, high hedges, countless ornaments.

This stage of the project Ballestra is particularly inspired by the Maze of Masone, town near Fontanellato in the province of Parma, recently built by Franco Maria Ricci: eight hectares of maze, three kilometers in total vegetable sottogallerie path in bamboo canes five meters high from Liguria and France. So describes the same Franco Maria Ricci: "I discussed labyrinths throughout life, with Italo Calvino, with Roland Barthes, Jorge Luis Borges. He was obsessed with it, he quoted them constantly in his stories, as is the Theme of the Traitor and Hero, Bernardo Bertolucci from which he drew his "The Spider's Stratagem". Borges was a guest in my house twenty days, in the eighties, and it was then that I began to think about building a labyrinth".

STAGE FOUR: The labyrinth in Architecture - The Pilgrimage

Globalization helping, we will work to standardize extensive consciences, closely followed,
harassed by the need to be efficient. After what, Fusse not imagine an economy
based on the Don will seem futile, if not dangerous. Most will see the act of a lunatic current
behind a chimera.

Julien Friedler – The Truth of the labyrinth text n.8

During the twelfth and thirteenth centuries a path shaped maze, always unicursal, He began to be depicted in the inside floor of the Gothic cathedrals, as in the case of the Cathedral of Siena and Chartres cathedrals, Reims in Francia e Amiens. These labyrinths are the symbolic path of man towards God and often the center of the labyrinth represented the “City of God”. The function of the labyrinth is to be a symbol of the pilgrimage or the path of expiation: It was often path during prayer, and he had the validity of a pilgrimage for those who could not take a real trip. The passage through the labyrinth was also called “pilgrimage”. You had to follow an obligatory path, and along the way you could never back through a point already passed or shorten the route. The length and tortuosity of the path alluded to the difficulties that may be encountered along the spiritual path. The new modern pilgrimage, not induced by spiritual religious reasons, but need political and social materials, is that of migration flows from poor countries to rich ones. 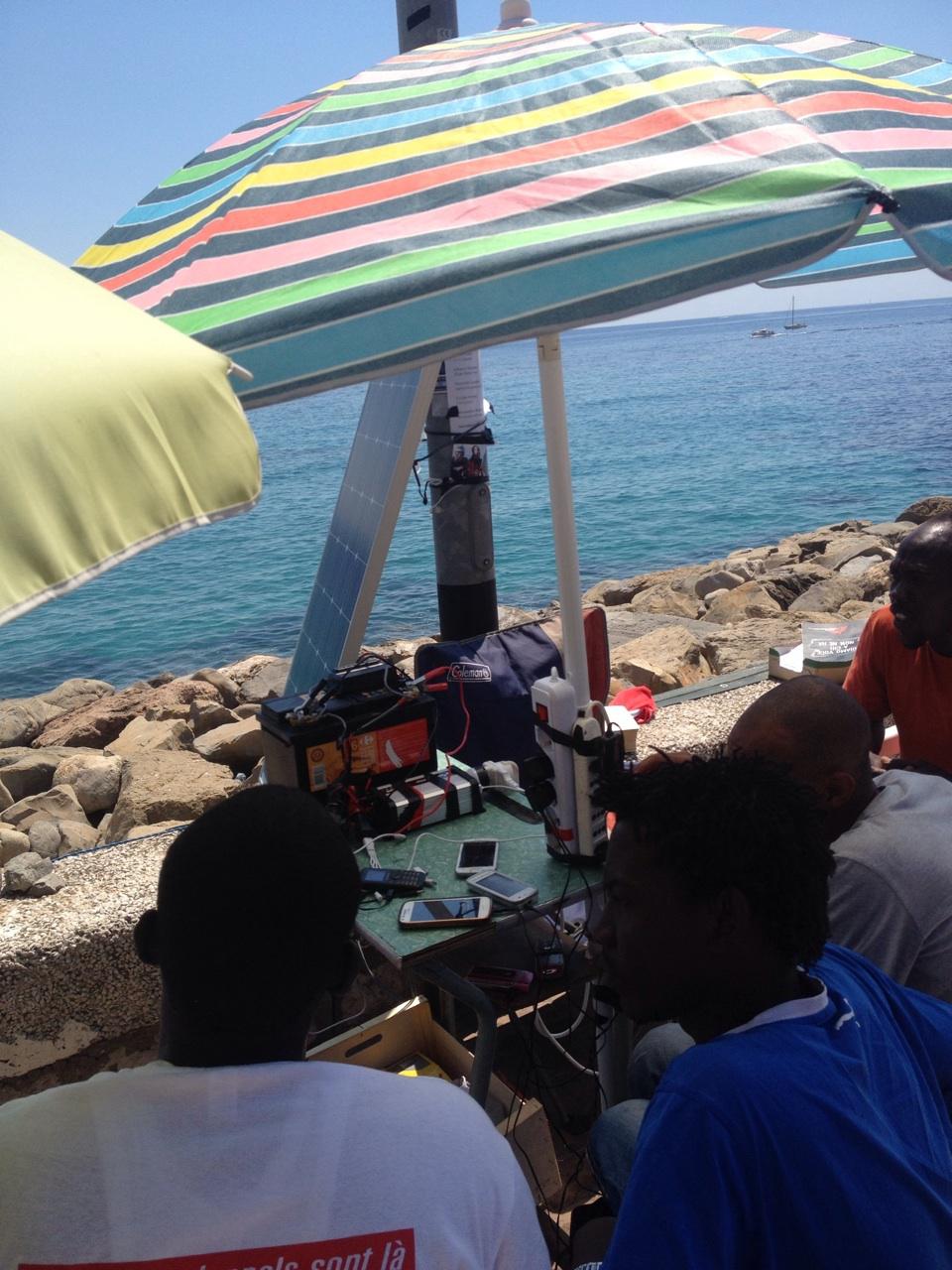 Always living in a border area and could not remain indifferent to the recent phenomenon of migrants stranded at the border between Italy and France, in permanent garrison on the Balzi Rossi cliffs, Maria Rebecca Ballestra has decided to decline the theme of the labyrinth and the pilgrimage in relation to migration. In the inner courtyard of the gallery Spazio Testoni, a solar panel that powers umbrella issue radio and a screen with some interviews and stories of the crossing of some migrants in Ventimiglia. The same umbrella specimen was installed at the border to allow migrants to recharge their phones and call home. Many of them, just as in a labyrinth, I am completely lost, they do not know exactly where they are, in what direction they need to go, where geographically the countries that want to reach. 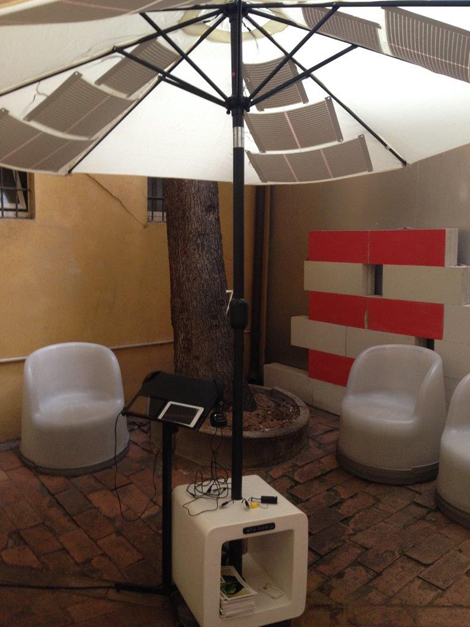 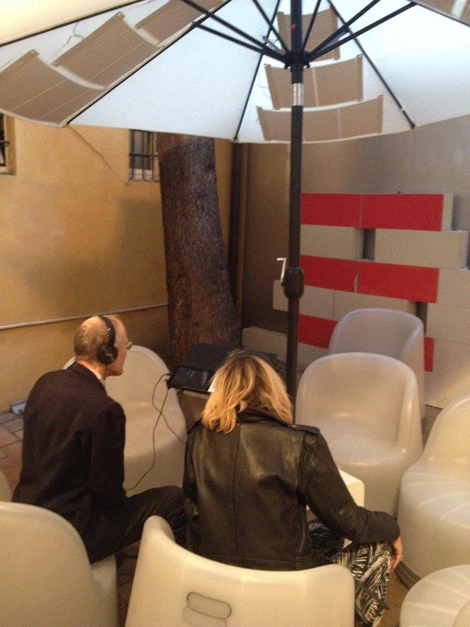 This installation was presented on 30 September 2015 at BDW

The work of Maria Rebecca Ballestra is based on reprocessing and reinterpretation of social issues, political and environmental codes and synthesis of ethno-cultural learned during numerous artist residencies carried out in countries geographically and culturally distant. The trip is his main source of inspiration: reflection on the history, on ancient traditions and customs of different countries of the world today are a tool to relativize the cultural differences that divide men, to escape from the Eurocentric perspective and to offer its partners find new ways of active and critical. The works of Maria Rebecca Ballestra often arise as projects site and context specific and they need the space that welcomes them to enhance their communicative and emotional valence. The issues to which the works are inspired are strong, complex and current. The themes that are reflected linked to double as an emblem of the circularity of the eye, eco-sustainability and pollution and, more recently, to post-umano, the border between Nature and Science and between natural and artificial.

The Testoni Space gallery presented within their own spaces and Art Fair 2013 and 2014 works of his project Journey into Fragility (www.jouneyintofragility.com) started in 2012 It ended in May 2015 with a permanent installation on the Certosa Island in Venice realized with the support of the Albert II of Monaco Foundation.

Philosopher and psychoanalyst, before becoming a poet and visual artist. He founded in 1990 Artistic Company Spirit of Boz. Playing the boundaries of aesthetics, the social sciences and the dream, the “Boz” It materializes through a group of works of art: texts, paintings, installations and performances by the artist, but also through the implementation of a participatory creative program: BE BOZ BE ART.