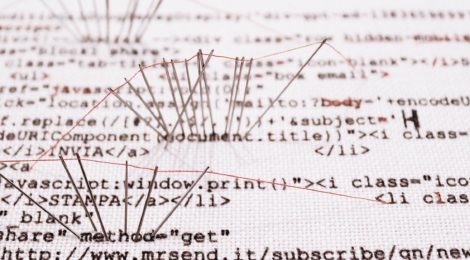 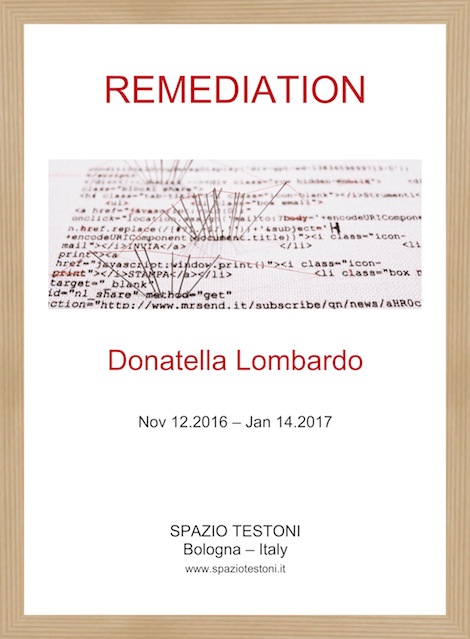 The SPACE Gallery TESTONI in Via D'Azeglio 50 a Bologna, It presents Donatella Lombardo staff REMEDIATION, which opens Saturday 12 November 2016 from 18,30 all 20,30.
The title of the exhibition takes its term loan remediation from the eponymous theory advanced by scholars Jay David Bolter and Richard Grusin, who they say that the digital media content are all the other media, starting from the most ancient forms of analog communication. A summary of terminology which are based works that Donatella Lombardo has specially made for his first solo exhibition in Bologna, through which he interprets and shows us with his original art research facilities and current information critical, investigating of mass communication technologies, and in the specific, communication via the Internet and the subsequent evolution of the modern language spoken and written. Its intent is to lay bare the mechanisms that support artistically and make accessible the Network, offering graphic and narrative processing taken from the media flow information today. And it is from within this media stream, sometimes hidden and sometimes abandoned on various computer media, Donatella Lombardo takes the fragments of the texts shows us harnessed on a canvas, as traces of quell'oralità and that writing for a long time have occupied different physical spaces to express the thought and lived the popular and elitist, and which today are made from a mixture of heterogeneous forms of communication, where the word, sound and image merge, coexisting in unison as one entity ready to shape our identity remedied.
His deconstructions-media reconstructions are often metaphorically represented as ancient "mending" performed with needle and thread, to want to rebuild and maintain the indissoluble link memory of our present to our past and the fact that what we are today is the result of the information that we have been left behind by those who preceded us and what will be the future of humanity depends on what today to inform us.
finally, in corpus of works scores Mute, made for this exhibition dedicated to the music and forgotten women, embroidery needle and thread is associated with bobbin lace pillow, ancient embroidery instrument to which they were devoted women, in particular those of the beautiful Sicilian Island, land of origin of Donatella Lombardo. 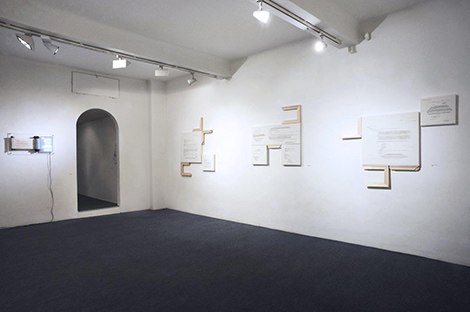 "Once we have handed over our senses and our nervous systems to the manipulations of those who seek to profit by renting our eyes, ears and nerves, in fact we have no more rights. yielding eyes, ears and nerves to commercial interests is like handing over the common language in a private company or give a monopoly to the Earth's atmosphere society ".
(Marshall McLuhan, Understanding Media)

The exhibition opens in the first room of the gallery with the installation entitled media columns: two large panels formed by two each in transparent plexiglass plates, which contain within them hundreds of overprinted canvas fragments with as many fragments of hypertext. The two panels suspended from the ceiling by means of steel cables, evoke the profile of two Greek columns, with the intent to remember the importance of the “medium” or of the means which conveys the information, not only in quality of container, but also the support which needs to be crossed and observed consciously.
On the other walls, works that investigate the languages ​​of the major social networks: Facebook, – Tele-graphic visual abstractions - And Twitter Fragmentary graphic evolutions / The Twitter middle ages - That Donatella Lombardo has created "stealing" private chat clippings, personal data, as well as public posts, and news provided by the same company, which highlight the range of these giants information. In particular, in to Twitter traits text snippets appears several times the word "subscribe", traces of which harness the web as illuminated signs. In general, posts appear extremely synthetic, but it is the very nature of the medium that requires it. How would Franco Carlini, the style of the Web is fragmented into small pieces. Even the way in which the eye runs on the image / text, work has perceptual roots: moves by leaps and diagonally, so sometimes a little 'neurotic, in search of the points where there is a greater accumulation of information. This simulates our usual way of understanding the information online, now away from the mode of reading text books.
In narrative discontinuity, blog #1 and # 2 blog, Each work consists of two linen cloths of different sizes digitally overprinted, on which are outlined briefly some notes, reflections, indications and comments, at the crossing of narrative styles and the different language colorings of the various editors of the texts published on the blog.
At the center of the wall at the same hall arches, l'opera Spiritual land / Spiritual Earth, It composed of two pressure rollers extracts from an old route printer that tend a flap of fabric and sewing digitally printed on one side to a page of paper greaseproof wound on one of the two rollers, evoking an ancient volume, to represent no solution of continuity between the analogue and the new digital media. The whole is supported by a framework of Plexiglas and LED that radiates a mystical aura to the whole. Donatella Lombardo for this work has drawn the text printed on the fabric and on the paper from the source language site Alibaba.com, the same name Company name inspired by the famous fairy tale, where the main character Ali Baba has the power to open the sesame behind which a treasure is hidden. The title is thus an ironic definition of the potential offered by the web today. 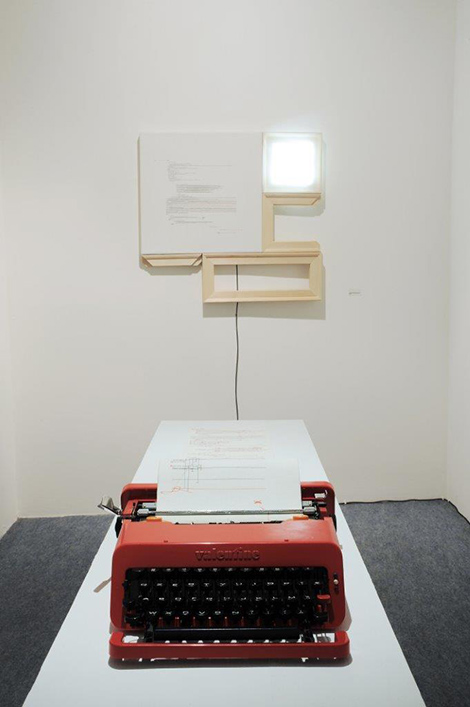 In the second room of the gallery, an installation of paintings digitally imprinted linseed, with embroidery needle and thread and with wooden frames surrounded by fiber optics, It is the work Remediation inside the Canvas 4, that decomposes and assembles pieces of digital communication routinely assimilated by users of the web. The work is then formed by assembling different textile areas that have been imprinted, through careful editing work, structures 4 Web sites whose common denominator about time, which, according to sociologist Todd Gitlin, Today we live in a large part by using the media with the aim to entertain us in the moments of waiting, shorten the time-to-productivity jobs, or prolong our pleasure. In this work explored the computer places are the videos of the news information and the film (Rai.it e Sky on Demand), symbol current popular entertainment, the website of a newspaper (The Corriere della Sera) and the site of one of the time banks. Finally the use of optical fiber that passes through the neighboring parts of the work, outlines the limits and the boundaries of two worlds, the real and the virtual, Its backbone is the light factor.
Inter / media actions Instead it contains an elaboration of the text fragments taken not only from a web page of the online newspaper (Daily fact), but also from articles taken from the edition paper, subsequently translated into the respective virtual version, simulating the newspaper web page via the HTML code printed digitally on fabric. The work is proposed as a reflection on information conveyed by the paper and digital edition printing, whose virtual space is evoked by the writing printed on backlit paper. A space that is opposed to the world lukewarm intimate embroidered by threads and needles which identify and freeze in time the words and symbols of our contemporary language printed on linen fabric.

It occupies the entire third room of the gallery installation analog Rimediazioni, where a long roll of cloth, overprinted with the fragmentation of the source code of the website dedicated to Marshall McLuhan (Edmonton, 21 July 1911 – Toronto, 31 December 1980), supporter of the view that the medium It is the message, It protrudes from an old Olivetti typewriter Valentine, which it represents the simulation of the analog character of the typewriter in its digital version "remedied" on the web. The pink squares on the canvas are the representation of the "glitch error", that usually appear on the interface graphics hardware when a system does not recognize another. This work is inspired by the theory advanced by scholars Jay David Bolter and Richard Grusin that "... the digital media content are all the other media, from analog ones ... ", and then the cloth roll indicates the flow of printing technologies by textual formats to new forms of hypertext, which highlights a nonlinear type of writing. 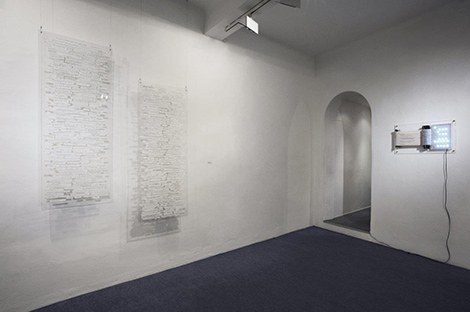 finally, the body of work scores Mute, It is presented in the last room of the gallery and is separated from the rest of the way only apparently. From this project took shape the top twenty works, whose visual content is taken from excerpts of musical scores belonging to different women composers, not only Italian, whose work is not yet fully recognized to date. Many of them have been forgotten or studied only in recent times. Their lyrics and their musical works are in fact not popular. One of the cases that it cites for simplification of all, It is to Augusta Holmes (1847-1903), counted according to Gérard Gefen studies among a number of very famous composers such as Beethoven, Wagner, Chopin, but forgotten for a long time. The musician signed himself under the pseudonym Hermann Zenta, a common practice among women composers. It is for these reasons and for the interest in gender studies, Lombardo that Donatella has decided to work on the artistic contributions of some women composers who are fully part of the history of music, to ensure that their legacy is to emerge as a tribute to the feminine genius. It is fair to add that the musicians in the past centuries have been numerous and have populated the art scene since ancient times. Therefore, at the time for the realization of these first twenty works, the artist had to choose only some of them reluctantly, born and lived in different eras. 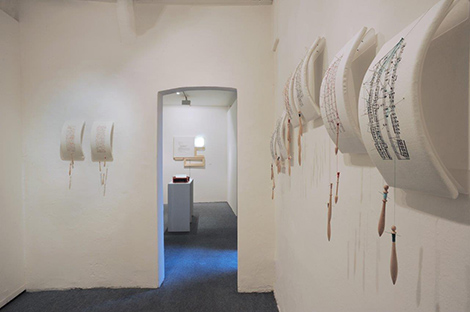 The documents of the scores in digital copies and / or originals were found in the Petrucci Music Library and at the library of the Conservatory Vincenzo Bellini in Palermo State Music, thanks to the collaboration of the Master Darius Cicero, while another study material was kindly shown and offered by Professor Annarosa Vannoni Conservatory of Music Giovanni Battista Martini in Bologna and President Patricia Adkins Chiti Foundation Adkins Chiti: Women in Music, with which Donatella Lombardo had an enjoyable and enlightening comparison.

The 20 scores Mute on display show an excerpt of each reworked the score and printed on linen. The compositions are then attached to a curved support Plexiglas, while the score and 'wrapped around a rigid cushion and dotted with pins, which together with the threads and the bobbins, create an architectural microstructure from whose plot emerges a sound-color map of the spirit of these artists and recall the bobbin to which embroidery were often officially exclusively engaged in many of the women music of the past.

With the collaboration of 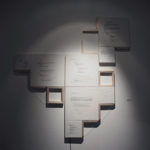 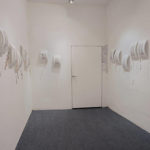 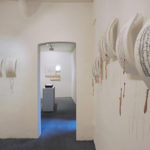 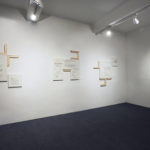 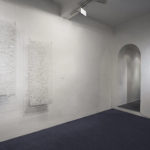 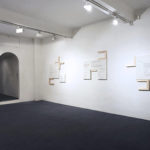 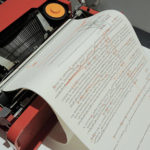 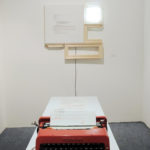 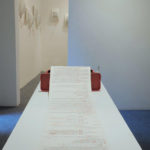