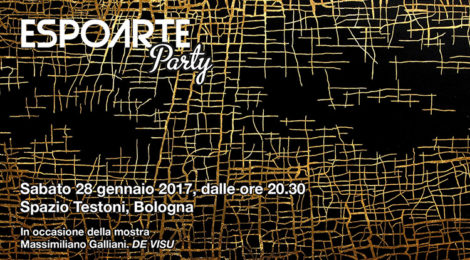 On the occasion of Art Fair 2017, Saturday 28 January from hours 20.30 up to 24, in occasione dell’ART CITY WHITE NIGHT bolognese, will take the’Espoarte Party, hosted for the occasion by Gallery Space Testoni, Via Massimo D'Azeglio 50 a Bologna.
The event is part of the staff, by title de all, of Massimiliano Galliani, winning artist in Arteam Cup 2016 the Special Testoni Space Award.

To all those present (while stocks last) will receive this precious gift.

It has passed 10 years since our association and Figli di Pinin Pero S.p.A.. have for the first time joined forces to give life to an object already in itself is unique, as a portfolio of collectibles sugar packets, bringing together the specificity of their respective realities: the company's established reputation of Nizza Monferrato (AT) - A leader in the import, processing and packaging of different types of sugar - and innate vocation as talent scout of the Cultural Arteam and Espoarte magazine, His direct emanation.
In 2006, the folder has been so dedicated to a young Camporesi, artist she also came back - during the 2016 - To confront the project sug @ R(T).
The search for new talent, the growth and professional development of members, promoting opportunities for visibility and exchanges, and the mission of our Association. And in fact this portfolio which you are holding in your hands is the result of the creativity of our associates.
Particularly, the 18 works reproduced on the envelopes were selected from among the Arteam all'Arteam Cup nominations 2016.
The folder is the beginning of a partnership with the Figli di Pinin Pero once the conveyance of the first contest for - the sug @ R(T) Contest - which aims to search for new talents which contribute to the promotion through an unusual instrument and original as a sachet sugar.

on the occasion of