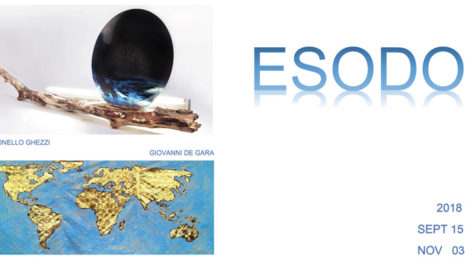 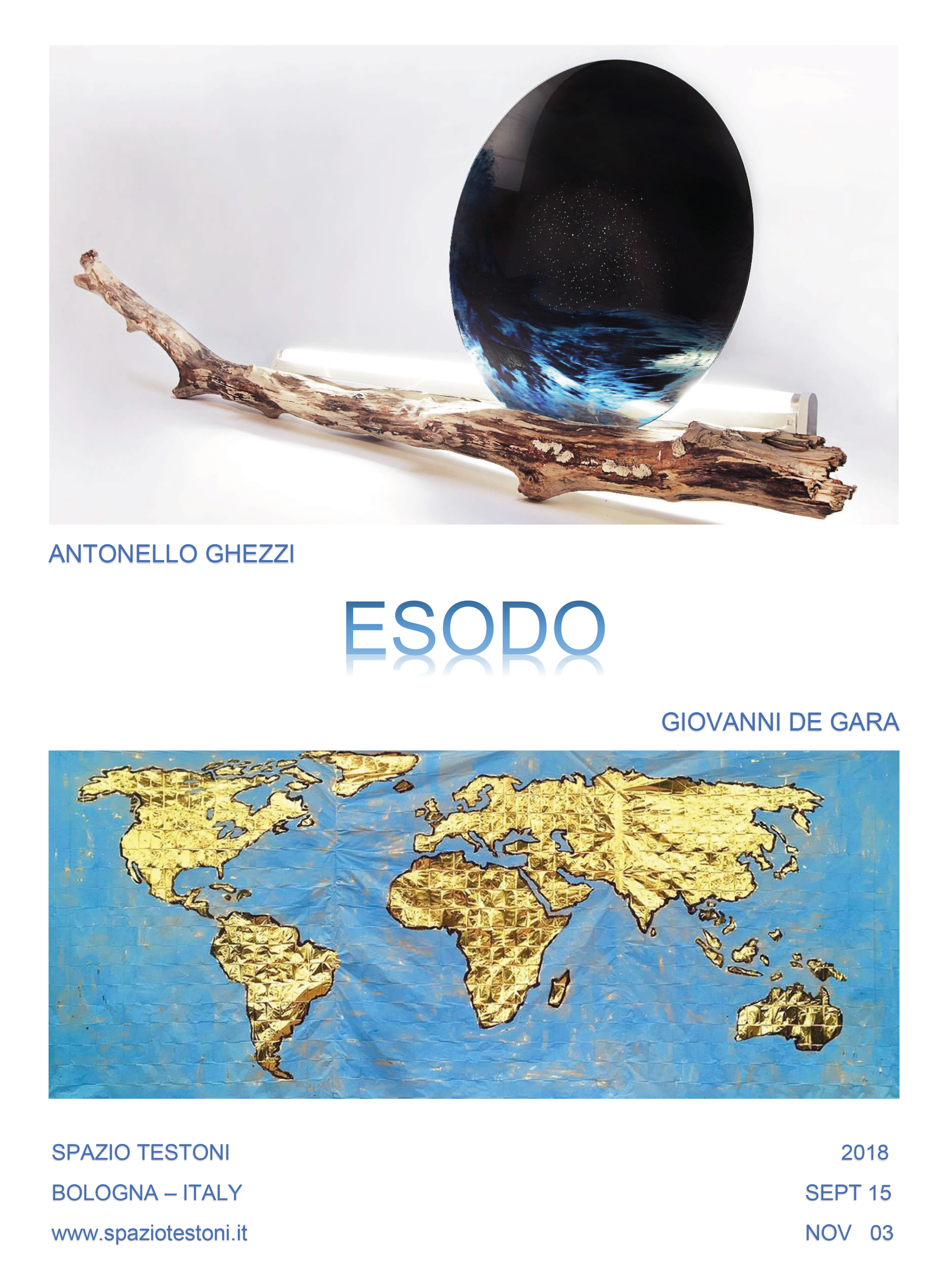 At Gallery SPACE TESTONI, in Via D'Azeglio 50 a Bologna, Saturday 15 September 2018 from 18,30 all 20,30 Exodus opens with works by the Bolognese artistic duo Antonello Ghezzi and the Florentine artist Giovanni de Race.

EXODUS, It comes from the greek word èksodos, It made up of former "outside" and hodos "Street"; so it means leaving a trail, which inevitably becomes another, fueling fears of change and fears, but also new expectations and new hopes.

In this double staff we are comparing two different conceptions of Exodus: an inner and universal, one proposed by the duo works Antonello Ghezzi, investigating the wishes of escape from reality and human loneliness, and a current strongly, what it is proposed by the artist works John de Gara, reflecting the impressive migratory phenomenon taking place and the widespread desire for fulfillment of the individual from the global economic and cultural system.

For the Antonello Ghezzi each of us is constantly on the go, everyday, for real or just his imagination; each of us would like to escape, for different reasons and perhaps all valid, because we are so cowardly and so brave at the same time. We're all going somewhere, twenty thousand leagues under the sea or on the Moon, just as individuals and together as humanity. The sea and the sky are the constant elements in which we are immersed, are our witnesses and our means of locomotion. Kind of blue is the installation that welcomes visitors in the first room of the gallery: a big trunk supports a circular mirror on which is painted the sea and recorded from behind a starry sky that illuminates the journey and hope. On the horizon the blue of two Clouds that look like windows open on a new destiny.

A destiny dreamed and desired as that world ELDORATO surrounded by the blue sea John de Gara He painted using as support life-saving objects: Isothermal blankets normally used for first aid to migrants. A work of the size of more than four meters wide and two meters and a half positioned on the other large wall of the first room of the gallery height and accompanied by video Birth of a Nation with the image of a golden flag which is violently shaken by the wind and which then fades on poetic images dell 'Abbazia di San Miniato al Monte in Florence, where the 28 June 2018 Giovanni de Race overlay with gold drapes insulated the three portals to access the Basilica, portals for their ancient builders had to be inputs to salvation and the anticipation of the World beauty that will.

The exhibition continues with another installation to the entire wall Antonello Ghezzi, All at the sea realized with dozens of small pieces of wood brought ashore from the sea and surmounted by fragments of mirrors on which small boats backlit by feeble candles are engraved, flanked by a large boa, Love also recovered on the beach, pierced by a neon light to illuminate our inner journey by posing as front of a mirror that tells us Know yourself. Between sky and sea, perhaps a small boat and a loving buoy will save us and a distant light Don’t forget the magic You will discover a new magical reality.

Four other works on blankets isothermal John de Gara juxtaposed together to represent Pangea ancient era when the land emerged from the sea were all united and constituted a primordial world with no separations and no boundaries between different Member, means that the origin of the Earth all living beings were together. Then l 'Africa and the 'Europe, separate and at the same time united by the Mediterranean Sea, with the center 'sItaly that for many migrants is the first port in the world he dreamed and wished they hope to finally be welcomed.

And especially during the month of August from Northern Africa it intensifies the exodus of migrants to Italy, theirs Eldorato.

And it is also in August that also millions of Italians left for the destinations for their holidays, each to their own favorite place. L’Eldorato many Italians, however, often is not a real place, but a state of mind, a striving to live without working, on pristine beaches, drinking cocktails with exotic fruits in foreign territories, distant, imaginary and imagined. Then, dream to live comfortably under other flags, as for many years it was the flag of the United States of America.

Today the expectation of the Italians of a new life on vacation is stored in Scratch and win, especially in the great classic: Tourist forever.

But if it is true that pleasure is in expectation, So why scratching?

John de Gara signed dozens of Scratch and win just above the space scratch, then he puts them between two sheets of glass and framed them as his works to ward off the temptation to scrape and with the intent to expand so the value of leave, which normally lasts in this game instead seconds. Indeed, if the card is removed from the frame and is scraped out of curiosity to know if it is winning, the artist's signature is canceled and so the work is deprived of its value and pleasure of 'Expectation back to being a simple lottery ticket, however rarely successful.

To each of you choice!

exposure EXODUS It will remain visible until Saturday 03 November 2018.

ANTONELLO GHEZZI
The artistic duo was born in 2009 Academy of Fine Arts in Bologna, from the meeting of Nadia and Paul Antonello Ghezzi.
They begin their first collaboration with the work "Toilet Project", a performative blitz that invaded the bathrooms Arte Fiera. Then they continued to work together, introducing their works not only artistic contexts, using industrial materials and everyday objects such as for the "Mind The Door!"An automatic sliding door that only opens with a smile, presented for the first time in Art Fair 2012 by Silvia Evangelisti, and then at the Pinacoteca di Bologna, and it is currently visible at the entrance of the Church of Santa Maria Maddalena in Bologna in Via Zamboni 49, where from 2013 It was installed permanently
The duo, based in Bologna, He has exhibited at the Italian Institute of Culture in Athens, Documenta 14, BIEL in Beirut, Arsenal Verona, Petit Bain in Parigi, Usina del Arte in Buenos Aires, Pinacoteca Nazionale di Bologna, Moscow Bienniale, Only because of the Museum of Turin, Pitti Uomo in Florence, roBOT Festival, Museum of Villa Croce, Sarajevo Winter Festival, Can opener di Delft, CIFF Copenhagen, the Museum for the Memory of Ustica in Bologna and in many other public and private Italian and international contexts.
On the anniversary of the fall of the Berlin Wall, Testoni the gallery space of the Bologna 09/11/2017 It hosted their interactive performance with the audience "Blow (Against the Walls)"Accompanied by their works in Athens for Documenta 14.
Their work is characterized by the poetic value and the participatory aspect, collaborate with companies and scientists, "Entering" art in everyday life, with art installations that combine technology, reality and poetry.

JOHN DE NOTICE
Born in Florence in 1977, the artist Giovanni de Gara has participated in numerous solo and group exhibitions, often preferring to work out of context strictly no gallery.
He graduated in Architecture, in 2005 He began to devote himself to contemporary art and 2006 He goes to London with Snake Attack, a project funded by the original sin JHA, Young Italian Artists.
In 2008 founded in Florence on FAF, Florence Art Factory, an industrial space converted into a place of cultural production dedicated to the performance and electronic music.
eclectic and versatile artist, from 2010 to the 2015 He produces different and unique artistic projects presenting them in public and private spaces in Italy and abroad
In September 2014, with the solo exhibition "Giovanni de Race: One, nobody, hundred thousand "to Testoni Space gallery in Bologna, Looking presents the project for the Pope, or rather "two Japanese seek the Pope but find oil" and, with the same gallery, participate in the latest edition of the Book Art project with The True Story of a tree by printing and selling volumes obtained by recycling scrap wood and old furniture.
In 2015, with other Florentine artists, he founded the collective BenzoPlanet dedicated to the commercialization of conceptual products, including the needle in the haystack, Tore up (the cloth that does not release dust) e Stay (flip-flops to stand still). Also in 2105, in Florence, con la performance Spring is late, illegally he exposes his paintings in the square of the Uffizi, in Piazza della Signoria, and in the courtyard of Palazzo Strozzi.
In 2016, a bit 'fed up insulation in his study of the dynamics of the official art market, Launches Monthly project artist and find 100 collectors that use it for a year, receiving in return a work per month. In the summer of 2016 The idea FRAGILE project, an update - a revolver rounds, shotgun and submachine - of maps and tourist guides of the cities hit by the terrorist attacks of 2015-16.
The 20 September 2017 launched an appeal for the second edition of the Monthly revolt artist Italian collectors, Swiss and US.
In the spring 2018 starts his latest project Eldorato, which is divided into a series of site-specific installations that use as raw material an object life-saving: Isothermal blankets normally used for first aid in case of accidents, natural disasters, but mainly used in rescue of migrants. With this saving will be gold coated the doors of some churches and some symbolic places Italian, da north south, up to Lampedusa as a global message of welcome.
The trip started on 28 June in Florence, the three doors of the Abbey of San Miniato al Monte which this year celebrates the millennium of its foundation. The project aims to promote a deeper reflection on the welcome theme to each individual, regardless of race, gender and creed, to give a sign of warmth and salvation from the contemplation of a golden shining carats but not for the beauty and simplicity of his message. The journey of Eldorato will be told in a documentary film by director Peter Pasquetti that will follow each installation collecting stories and reflections of those who join the project during its journey. Among the first to join Father Bernardo Gianni, Abbot of San Miniato al Monte; Tomaso Montanari (art historian); Stefano Mancuso (scientist, founder of plant neurobiology), and Francesco Malavolta (press photographer, for twenty years in the wake of the peoples moving on Europe's doorstep) that will accompany the project with a series of shots specially chosen for Eldorato. 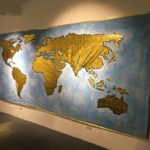 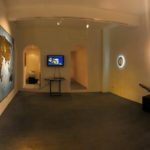 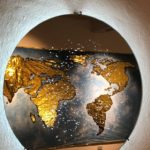 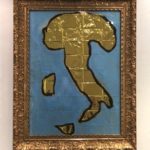 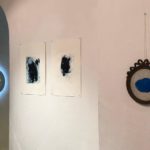 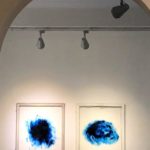 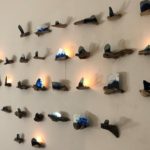 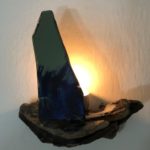 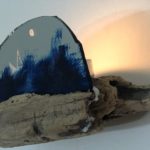 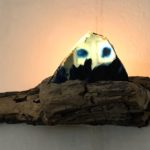 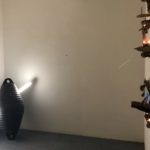 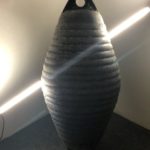 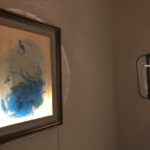 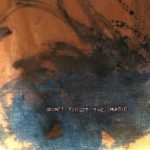 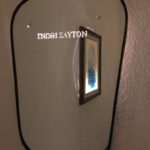 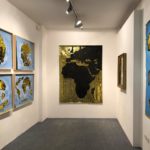 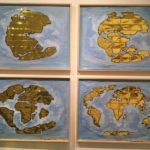 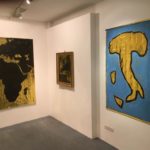 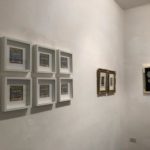 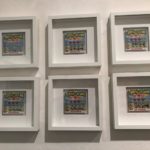 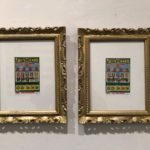 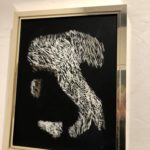 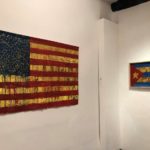 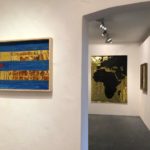