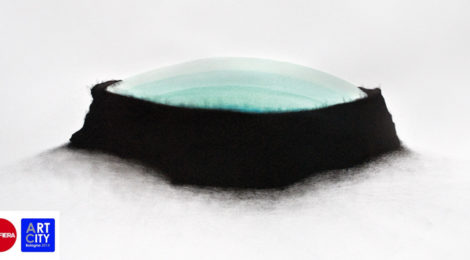 SILENT It is the title Alberto Mattia Martini, curator of the exhibition, He wanted to give the body of works presented in the gallery spaces, as a thematic synthesis of this exposure, which investigates the correlation between “nature, human, aria, space and earth”. A silent relationship, almost a constraint that necessarily involve a total mindset on the part of the user to establishing with the artist and his works that Caroline Le Méhauté defines: Negotiation.
The French artist in his search uses multiple materials such as: peat and coconut fiber, metal, China, watercolors, paraffin, pigments and natural elements of various kinds, from which bursts forth creative energy, seemingly suspended in time, which triggers an silent communication between nature and man.
Caroline Le Méhauté lives and works in Marseille and Brussels and has already made several international exhibitions and residencies.
It is available at the gallery its first monographic catalog“Create hollow” in English and French cm. 30×25 pp. 128 – Editions Muntaner- France.
The exhibition will be part of the circuit Art City Bologna 2014 and together with works by Maria Rebecca Ballestra and ORMA, a large installation of Caroline Le Méhauté realized with powder of the outer shell of coconut, material that characterizes many of his works, It will be presented by the Gallery Space Testoni also in Art Fair 2014.

Describing and interpreting the meaning of LandArt, Dorfles claims that the particularity of what is also called Earth Art, It is an intervention on nature and nature. This "contact" with and in nature is not an activity aimed at a physical and conceptual intention hedonistic and / or ornamental, but it is a taking of conscience of the intervention of elements that have a natural order and that such intervention are upset and cracked. Caroline Le Méhauté, although they can not be counted among the artists of Land Art is a question of age than for a contextualization of the artistic object not only aimed at the natural, perfectly interprets the meaning of "natural sublime". The man-nature relationship, and consequently art-nature-man, He sees its birth many years ago. We can say that it has always been an essential trio in the history of humanity, since the first human interventions in their ancestral homes through interpretations of the natural world and animal, therefore seeking an indissoluble link between the subject, concept and natural object. An attitude, to interact and therefore interfere with the natural and the environment, which is also home in the search for Caroline, where nature becomes the world, source of inspiration and the source from which to draw the idea and matter with which to compare. In a sense The Méhauté is oriented towards the Antiform, in the sense of Process Art, not for the type of materials used, As in an attempt to break free of formal structures and move towards a re-working and experimenting with different materials and opportunities for interaction with the environment, the force of gravity, the air, space, the earth and then with everything that is unstable, which it imposes or undergoes changes and is therefore undetermined. Inevitably, the choice to use the material in direct and free contact with the space, not remain anchored to the host structure requires or permits a report does not set or sets, then locked up in formal superstructure and thought while leaving free the creation of wandering in the environment and between the viewer: perhaps at the risk of being dissolved and living in the impalpable, but certainly to be total.
The material and then the element that distinguishes the work of Caroline, and that immediately becomes the protagonist, is the fiber peat or coconut. Choice also due to the effect of the case, although as you most likely know it does not exist, or at least in a small percentage, much more we should probably talk about circumstances, moments or special moments in which you create the inevitable contingencies where they met and then the symbiosis. I want to believe in the mystery that brings each individual to find his alter ego, certainly not find a light heart, but through research and experimentation as necessary stages and determinants. The "skin" of the coconut, as well as the outside of the human body, it is essential, sensible, and despite its resemblance it is peculiar and unique. These brown filaments, thick, brown tend to prefer a similarity with the human: both visually and in shape is reminiscent of the hair or hair, both organic materials that grow externally to the structure, They cover it. Originally also they clothed in man a protective and sensory function, which it resulted only in the later aesthetics territories, essential value for ' "building" of life as well as art. the coconut, and then accordingly also its fiber, any ambiguity: thanks to the height of the plant, poetically we could say that he dwells in the ether, in the clouds, even if the roots are well anchored to the ground, from which it seems to take, beyond that the brown coloration also some characteristics such as resistance and stubbornness.

The fact the Méhauté "galls" wrap, It draws and extracts the essence of it by relating the inside of the earth, concreteness with outside air, the impalpable inconsistency of abstraction. This crucial time, or better returns, the correlation between "nature, human, aria, space and earth ". All these figures are tangibly visible in the work of Caroline, except man, which through its material absence, while he is denying his physicality and then apparently in the elsewhere abbandonatosi, forecasts and imposes its presence and its indispensability aimed at giving substance, concept and essence of the work manifests. iconography of absence, Despite that makes use of the knowledge here and now, a time and a space is not infinite and eternal, It perceives the importance of the relationship and the exchange; a silent relationship, almost a constraint in which is necessarily provided for a total
mindset that you have to be established between artist, work and the onlooker: one that Caroline LeMéhauté defines Négociation.
Négociation is the title that's Méhauté virtually assigns all his works: Négociation plus a number, identifying specifically what work you are referring. The term Négociation which sees its literal translation in Italian with negotiation or negotiation implies and want interaction and reciprocity.
this exchange, as we said, between man and nature, and the work he has its protagonist, although absent, man. As for example it happens in the work Négociation 36: two PVC pipes installed in the ground and covered with coconut fiber take on the appearance of a periscope, and whenever installed in a given space assume the exact coordinates of the place where "a habitat". The look must therefore impose itself to go beyond, in the elsewhere we mentioned before, expand horizons, cultivate the emotional values ​​of socialization is with his peers and with nature, focusing on the creative qualities of man.
Decisions always require a waiver or in any case a choice, involving a dialogue with the self, introspection which is scrupulously explicated by installing Négociation 59, deaf decisions, accompanied by a subtitle that indicates how decisions are deaf or otherwise silent, face to face with ourselves. A room, a lamp, a chair and a table completely covered by coconut peat. On the desk you can see a mirror, clearly a reference to an objective and real dialogue, except that the mirror appears deliberately scratched: to the point that the scene takes on the appearance of an intimate conversation that conveys frantically in a metaphysical space, traveling empiricism, desiring an integral experience of empathy between the ego and the outside world. Probably the purpose is not to emulate the natural process, copy slavishly, as often it happens with a draft, something or someone physiologically and fortunately far from us; the secret, although Pulcinella, however often not prosecuted or even worse not included, It is fitting in with the nature, listen and observe the changes and becoming.

All this happens also in the work Négociation 57, grow, grow, grow, where a "carpet" coir "full of life", It is animated by emitting light and almost imperceptible movements. A silent communication, a breath or perhaps an emotional sigh, an experience that, reminds us of Edmund Husserl, can pass through all its stages: perception, imagination and memory. Three states - and, I would say, Also three conditions – that we are created also in the work Négociation 66, Extended fields, which provides for the simultaneous presence of more elements: a chair, a peat cube to which are connected the loudspeakers that emit a variety of sounds. The first visual impact and partly conceptual reminiscent of the work One and three chairs by Joseph Kosuth: the thought certainly involves the relationships that are formed and when you want to formulate a concept. Caroline Le Méhautè has retrieved peat which then created this small cube in Ireland, during a hike at one of the oldest mountains of the island.
Peat is a fossil fuel of quaternary age consists of vegetable substance semicarbonizzata and saturated with water, and represents the first stage of transformation of plant material into coal. It is significant that this matter is the ideal substrate for the growth of some species and that the French artist does used for the realization of his work. From peat cube two different sounds come: the journey begins with the acoustic effect pervaded by low, interpretation of the sound emitted into the earth from hypothetical sound waves, which gradually turn into noise who spread the planet's magnetic field recorded in space by NASA. In this work it takes a verticality, an impossible journey, imaginary but made possible by means of the sound between the ground and space and consequent return.
The weather here is absent, It is a universe, a hypothetical infinite in which the artist tries to identify with the All-imagining creates another place to tune with the environment, which it is then inevitably part of the self, a "vertical desire" to react to the immobilizing identity deprivation. 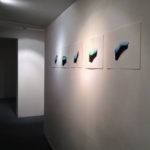 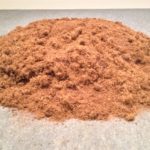 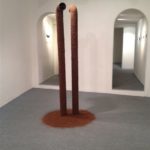 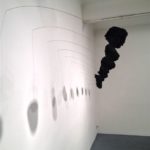 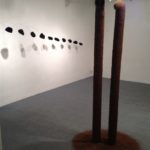 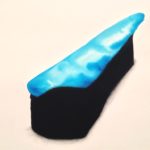 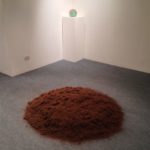 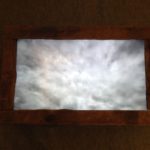 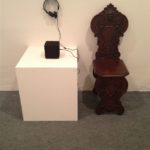 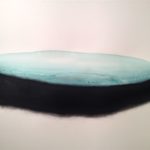 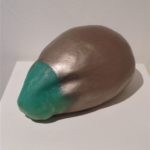 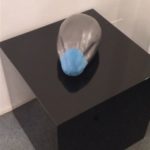